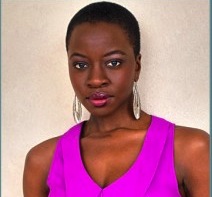 Danai Gurira is a playwright and actor.

Her plays include Eclipsed, which received premiere productions at the Wooly Mammoth, Center Theater Group and Yale Repertory Theater.  It recently won Best New play at the 2010 Helen Hayes Awards as well as Danai winning Best Playwright at the NAACP Theater Awards in August 2010. She co-created and performed in the award-winning two woman play In the Continuum, which premiered off-Broadway and toured the U.S. and Southern Africa. For her work on that production, Danai won a 2006 Obie Award, the 2006 Outer Critics John Gassner Award, and the 2004 Global Tolerance’ Award (Friends of the United Nations), in addition to being honored by the Theatre Hall of Fame. In 2007, she received a Helen Hayes Award for Best Lead Actress in In the Continuum at Woolly Mammoth.

Danai starred in the acclaimed film The Visitor (with Oscar-nominated actor Richard Jenkins) and on Broadway in Lincoln Center Theater’s production of Joe Turner’s Come and Gone. She is also featured in films 3 Backyards (Sundance 2010), My Soul to keep (Wes Craven, October 2010) and Restless City (Sundance 2011).

She has appeared in TV shows Law and Order, Life on Mars, Lie to Me, Law and Order CI and has a recurring role on HBO’s Treme. She is the title role of the upcoming film, Ma George. She recently appeared as Isabella in NYSF’s Measure for Measure (Equity’s 2011Callaway Award). She is the recipient of ’08 TCG New Generations travel grant for Eclipsed with the McCarter Theater and has taught playwriting and acting in Liberia, Zimbabwe, and South Africa. She is developing a play about current day Zimbabwe where she traveled in April and September 2010 with the help of another TCG grant and the McCarter Theater. Her newest play, a historical Zimbabwean piece entitled The Convert (a commission with CTG) will appear at the McCarter, Goodman and Center Theater Group Theaters in the Winter and Spring (2012). These plays comprise parts of a trilogy on Zimbabwe’s coming of age from a feminine perspective. She recently received the prestigious NEA New Play development grant to support the development of the Trilogy with Woolly Mammoth. She is currently a Hodder Fellow at Princeton University. She is also a commissioned playwright with Yale Rep. She received her MFA in Acting from Tisch, NYU. Danai was born in the U.S. to Zimbabwean parents and raised in Zimbabwe. She lives in New York City, and you can follow her here.

We formed a Delaware corporation for Danai.