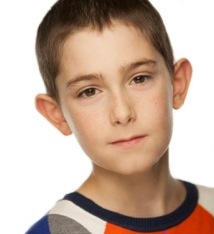 Meet one of the newest stars to join the Nickelodeon family, Diego Velazquez. Diego found his love for acting at the very young age of 7 in Portland, Oregon after being cast in CBS’s first feature film Extraordinary Measures alongside Hollywood greats Brendan Fraser, Keri Russell, and Harrison Ford.  Following his movie debut, Diego went on to a reoccurring role in TnT’s  Leverage, and a co-star role on NBC’s Grimm. When Diego is not acting he likes to fill his time with acting workshops and improv classes. He also enjoys helping with friend’s film projects, such as music videos, PSA’s and commercials. Diego’s latest project, a super-hero themed comedy “The Thundermans,” will be one of Nickelodeon’s newest television series for 2013.  Based around the Thunderman family, this comedy features a typical suburban family who also has astounding superpowers.  Between the older twins’ competing personalities of good and evil (Jack Griffo, Kira Kosarin), to the younger siblings (Addison Riecke, Diego Velazquez) typically annoying qualities, “The Thundermans” will become a comedic addition to Nickelodeon’s lineup. In addition to acting, Diego loves biking, skateboarding, soccer, and spending time with his family and his super-doggie Annie.

We formed a Delaware corporation for Diego.