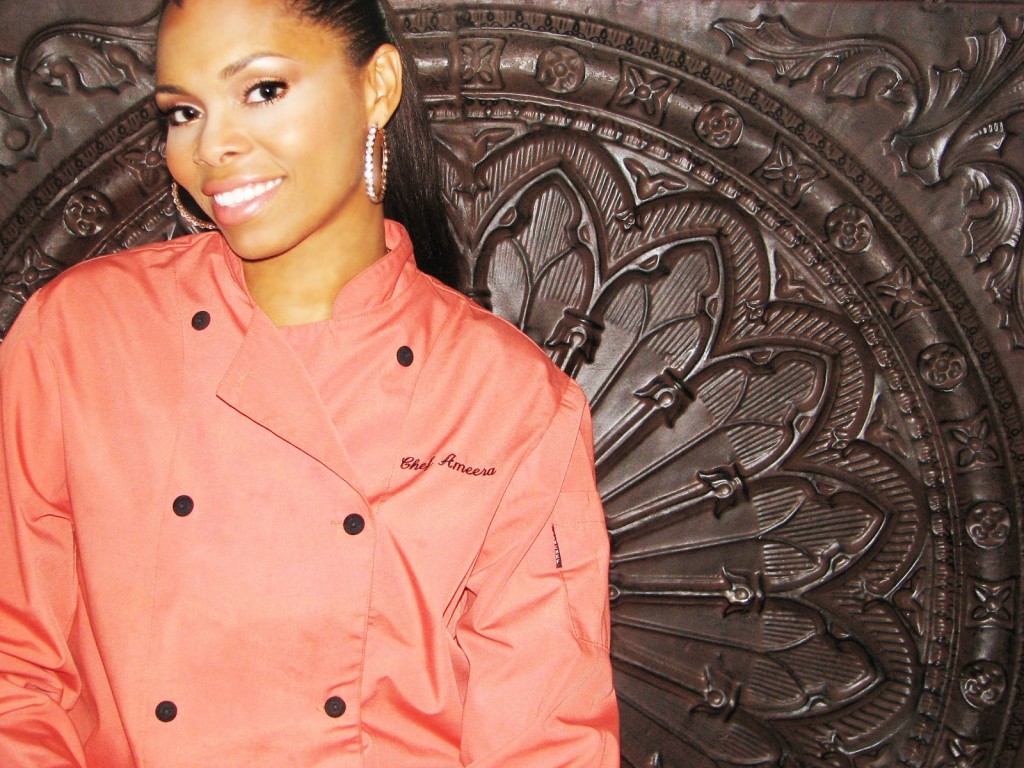 Chef Ameera calls herself a true “foodie,” as she began creating culinary masterpieces at the tender age of eight. The young Ameera Leguex set foot in the kitchen as an assistant to “the ultimate chef,” her father, for whom she conducted prep work with his daily grocery selections. By the age of 10, Ameera utilized her culinary craftsmanship to prepare complete dinners for her mother after her long days at work.

Following her own motto, Chef Ameera has parlayed her knack for cooking into an amazingly successful career as a celebrity chef and founder of L.A. Girls DO Cook, an organization and movement under which she proclaims, “L.A. girls don’t just order, we cook.” The innovative movement has provided a forum for Chef Ameera to team up with Los Angeles’ “it” girls, celebrity newlyweds, and self-proclaimed divas to teach these hot females to be even hotter in the kitchen.

According to Chef Ameera, “fresh ingredients with lots of flavor and love” are the quintessential elements behind her appetizing craft. Chef Ameera’s passion lies in approaching the most simplistic foods and applying her own culinary magic to them, which allows her audience to conjure up memories of a favorite dish prepared by a loved one or a favorite restaurant. Chef Ameera specializes in an array of cuisine, including classic American, Southeast Asian, Asian fusion, Italian, and Caribbean.

In March of 2010, Life & Style featured Chef Ameera as a food expert on the health and diet of platinum recording artist and international superstar Rihanna, as well as zoomed in on Chef Ameera’s delectable curry chicken and Bajan seasoning, while giving readers step-by-step preparation and cooking instructions for the exotic dishes. From film sets to red carpet parties to celebrity homes, Chef Ameera has become the culinary stylist and artist of choice for a wide clientele, including celebrities Keri Hilson, Stevie Wonder, Rick Fox, Eliza Dushku, Lil’ Wayne, T.I., and Paul Allen. Her expertise has been featured on Los Angeles’ Radio Free 102.3 KJLH and MTV’s “Daddy’s Girls,” starring Vanessa and Angela Simmons.

A native of Los Angeles, California, Chef Ameera is one of the city’s most highly-regarded food stylists, gourmet culinary artists, and celebrity chefs. The mother of two brings her love and warm heart in to the preparation and creation of meals which, to Chef Ameera, fulfill the nourishment of one’s body.

We formed a California corporation for Chef Ameera.