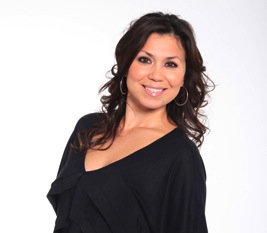 It is no surprise that midday radio personality Nautica de la Cruz has caught the eye of several major television networks since her arrival on the Los Angeles airwaves- this hip, sassy, and talented Latina has the looks to match the voice! She’s been featured on ABC, NBC, MTV and VH1.  Nautica’s career began with a short stint on a Northern California Spanish radio station, KNTA, and launched after L.A megastation Power 106 heard her English demo tape and made her their mid-day deejay. After winning the hearts of fans in Southern California, Nautica was wooed away by Power’s rival station KKBT, The Beat, to join morning lineup alongside Hip Hop greats Ed Lover and Dr.Dre.

Now Nautica is honored to work for 102.3fm KJLH owned by R&B legend Stevie Wonder. She produces his once a week radio shows as well as her own.  She brightens up your midday’s with a bit of Latin and hip hop flavor. She makes you laugh with her wittiness and gives you the celebrity scoop on her “Nauti News”. Nautica is also a community person. She loves encouraging kids to strive in school. Besides her daily radio gig, she has her own local Los Angeles based TV show “The Nautica Show” on InComTV. You can listen to Nautica on 102.3fm KJLH, from 10am-1pm.

Nautica loves connecting with people. She loves her audience and the audience gives her that same love in return. She’s ambitious, focused on her career and would like to venture into doing more television, creating shows, film and more voice-overs. She has a few projects in the works and maybe coming to a channel near you. She is a person that is not afraid to take a risk or try something new.

We formed a California corporation for Nautica.