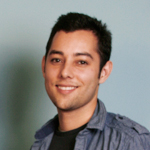 While working together in Silicon Valley at a fast growing startup, Sean Carpenter and David Dwyer found they shared a common drive for excellence in business and service.  They soon took on their own project, and over a two-year period, crafted SceneHop, a web-based application to help move people from online association to real world activity and friendship. eMinutes helped form Real World Apps, Inc., a smartphone app creation company, in October 2011 after the pair secured initial funding and became registered developers with Apple.

David says,”SceneHop is a smartphone app designed to help people connect locally with others having similar interests.  With this app, a soccer enthusiast can join in on a pickup game, a garage band can promote a show, and a traveler can find fellow movie lovers for a featured screening. Kindred spirits can connect spontaneously or by planning ahead, making friends they might never have encountered by chance. SceneHop makes possibilities.”

Sean and David are currently working on launching SceneHop, while also working on two new apps, with an ultimate goal to become a recognizable and dependable app creation company. Even more impressive is how the duo managed their startup from opposite coasts, with David working in San Jose, California and Sean currently attending law school in the District of Columbia. Be sure to be on the lookout for the Scenehop app launching soon on a smartphone near you.

We formed an California S Corporation for Sean and David.