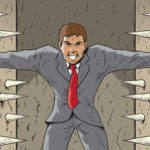 We’ve written before about potential liability for unpaid wages in New York, but the problem just got more serious.  It’s a serious corporate booby trap, especially for restaurants, bars, and other business that operate in New York with lots of employees.[1][2]

Here is the problem in a nutshell — One of the main reasons you form your business as a corporation or LLC is to protect your personal assets from liability for the company’s debts.[3] Small business owners almost certainly know about the asset-protection benefit of structuring a business as a corporation or LLC. But they likely do not know that in New York the ten largest members of an LLC and shareholders of an unlisted corporation can be held personally liable, jointly and severally, for all debts, wages, and salaries due and owing to the company’s employees.[4]

It used to be that there were at least two ways to work around this aspect of New York law, which appears to be “unique among the states[.]”[5] First, the law did not apply to corporations formed in another state that were doing business in New York.[6] The New York Legislature closed that loophole in 2016 by amending section 630(a) of the Business Corporation Law to make it applicable both to domestic corporations and to “any foreign corporation, when the unpaid services were performed in” New York.[7]

Second, section 630 of the Business Corporation Law applies only to corporations, so a business could be structured as a LLC to avoid the statute. The New York Legislature dealt with that issue in 2015 by amending section 609 of the Limited Liability Company Law (the “LLC Law”) to include a provision making the ten LLC members with the largest ownership interests personally liable, jointly and severally, for all debts, wages, or salaries due and owing to any employees for services rendered to the LLC.[8] As of this writing, section 609 does not apply to foreign LLCs doing business in New York. But the New York Legislature is working on closing that loophole, just as it did with section 630 of the Business Corporation Law.[9]

By their terms, section 630 of the Business Corporation Law and section 609 of the LLC Law apply only to the ten largest corporate “shareholders” and LLC “members,” respectively. So there are still two ways that you can structure your investment to try and avoid the problems posed by these statutes. First, you can form a second corporation or LLC to own your interest in the corporation or LLC that owns the underlying business. That way, the second corporation or LLC is the “shareholder” or “member” that is on the hook for the statutory unpaid-wage liability. Of course, there are costs associated with forming and maintaining a second entity just to own your interest in the entity that actually operates the business.[10] In addition to the legal and accounting fees and annual franchise taxes, you will have to be careful to follow corporate formalities and fund the second entity adequately from the outset to avoid having its veil pierced so as to visit liability on you personally for unpaid wages.[11]

The second option is not to take an equity interest in the entity that owns the underlying business. There are ways other than an equity deal to formalize your investment in the business, such as venture debt or a convertible note. You may even be able to maintain some measure of control over your investment with a form of promissory note or related loan document that provides for certain actions that must be approved by the holder of the instrument while the note remains outstanding.

These options may provide some ways for a primarily passive investor to avoid liability for unpaid wages under New York’s Business Corporation Law or LLC Law. But if you are the one who is actually opening and running the business things get even trickier. In that case, New York has another statute that creates a private right of action against an “employer” who fails to pay wages to an employee.[12] The Labor Law defines an “employer” as “any person, corporation, limited liability company, or association employing any individual in any occupation, industry, trade, business or service.”[13] As such, while an individual is not liable for unpaid wages under the Labor Law merely by serving as an officer or shareholder of a corporation or LLC, an individual may be held liable for unpaid wages if he or she qualifies as an “employer” under the Labor Law.[14] In determining whether an individual is an “employer” within the meaning of the Labor Law, courts look at the economic reality of the situation, including such factors as whether the individual had the power to hire and fire employees, supervised and controlled employees’ work schedules or conditions of employment, determined the rate and method of payment, maintained employment records, and approved any vacations.[15]

If you are in charge of most or all of those things at your business, then you may have a difficult time avoiding personal liability for unpaid wages as an employer under the Labor Law, even if you cannot be held liable as a shareholder under section 630 of the Business Corporation Law.[16] You could try to avoid being either a shareholder or an officer of the company that owns the business, but you still may not be able to avoid the “economic reality” of the power you wield over the employees. Of course, as my first boss used to say, if you try that, “at least you have something to talk about” if the situation arises.

[1] See Larry Getlen, Commercial Observer, The Treacherous Waters of Opening a NYC Restaurant (Aug. 10, 2016). This article uses a restaurant as the example, but it applies to any small, private business that has employees in New York.

[2] See Why in the World Would Anyone Incorporate in New York? and Why New York is Never the Right Choice for Jurisdiction.

[3] See Does a Corporation or a LLC Provide Better Liability Protection?

[9] Assembly Bill A5131 and Senate Bill S5966 both seek to amend section 609(c) of the LLC Law to make it applicable both to domestic LLCs and to foreign LLCs, when the unpaid services were performed in New York. A5131 has passed the Assembly, while S5966 is in committee in the Senate.

[10] See How Much Does It Really Cost to Incorporate.

[11] See The Benefits of Incorporating.

[16] See Wing Wong v. King Sun Yee, 262 A.D.2d 254, 255, 693 N.Y.S.2d 536, 537-38 (1st Dep’t 1999) (even though employees’ action against shareholders of restaurant corporation for $1.35 million of unpaid wages under section 630 of the Business Corporation Law was barred by employees’ failure to file suit in the required time, employees could still maintain their claim against the individual defendants as employers under the Labor Law).